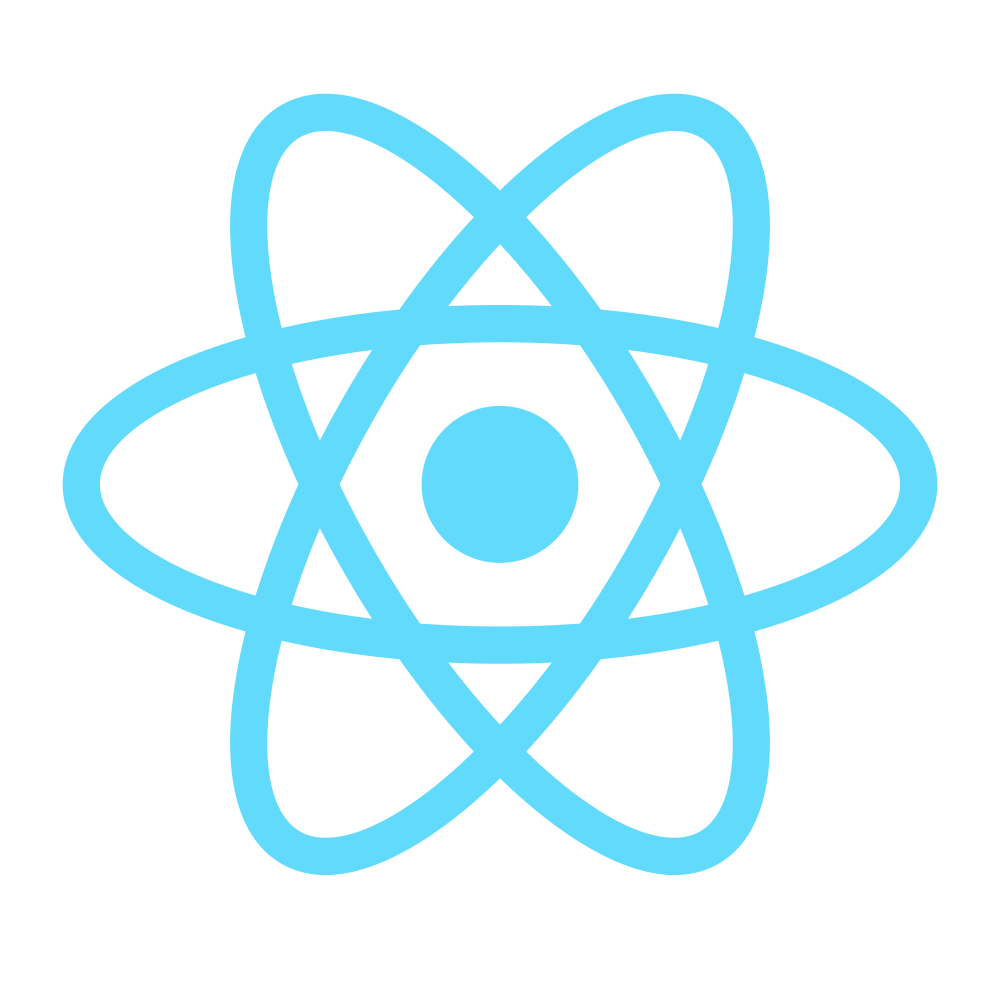 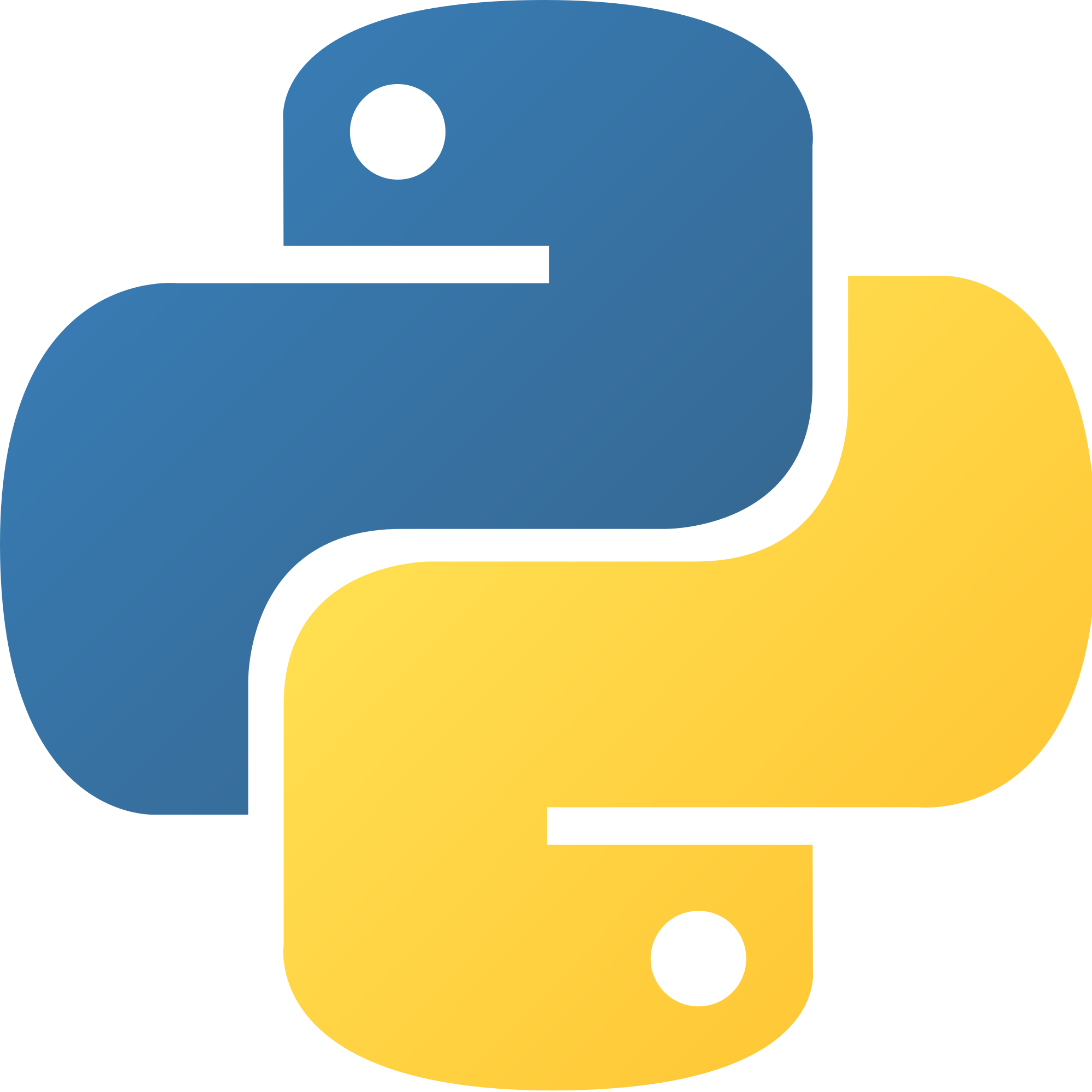 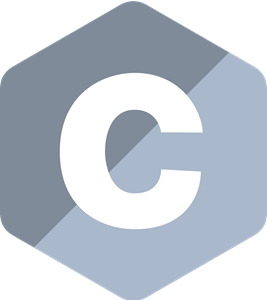 Spearheaded as Tech Lead the development of Readiness Checks – a year-long project with a team of eight engineers that culminated in the launch of in-platform automated pre-assessments. This tool allows teachers to assess their students' prior knowledge of the upcoming unit's curriculum, then provides quick and actionable recommendations for adjustments to their lesson plan in response to the data.

Contributed to a recommendation system associated with Specialized Support Profiles (SSPs) - a hub for teachers to share knowledge about students with IEPs, 504s, and other targeted interventions. Teachers can now see SSP data along with relevant interventions for individual students directly within their lessons plans.

Built accessibility tools in React aimed at improving the learning experience for students with IEP's and English Language Learners including Voice Typing and Text to Speech.

Introduced handwriting recognition into the student math editor using the MyScript API, allowing students to convert their handwritten math into LaTeX and insert it directly into their document.

Used Grafana and Prometheus to visualize incoming data for all the CSTA K8S environments from MongoDB representing worldwide cyber security threats and attacks on the AT&T servers in order to debug, monitor, and track performance and resource utilization.

Supervised a team of interns for the finance team, during which time the team raised $39.4 million in the third quarter – more than any race in Maine history, second-largest for a senate race nation-wide, and quadruple our Republican opponent Susan Collins. Projects included researching donors, preparing for national fundraisers, phone banking to solicit donations from high capacity donors, and buttressing critical operations in campaign finance compliance.

Automated in Python integral tasks for the finance team including calculating giving history for potential donors, standardizing contributor information for NGP, and streamlining the generation of thank you notes in order to significantly increase efficiency and output for the whole team.

Supplemented the overarching campaign effort during Get Out the Vote by knocking on over 1,500 doors for the field team, utilizing constituent pressure to expand access to absentee voting for 10 Maine municipalities with the voter protection team, and staffing drive-in Sara Gideon rallies for the political team.

Worked to uphold a safe and welcoming environment despite the presence of protestors by escorting patients to the clinic and enforcing boundaries on protestors' behavior.

Redesigned the Pennsylvania House Democratic Campaign Committee website by using HTML/CSS and Wordpress plugins to adapt the Tech for Campaigns template to fit the PHDCC specifications.

Westerfield, C., Doolittle, B. (2021) “Spirituality of the Traumatized Child: A Call for Increased Faith Community Participation in the Trauma-Healing Process for Children.” Journal of Religion and Health.

Machine Translation for English Retrieval of Any Language Project

Determined the optimal re-ranking system as applied to multilingual tasks for the development of a cross-lingual information retrieval system specifically for low-density and surprise languages, with training data in Swahili and Tagalog.

All About NLP Project

Create and update the All About NLP (AAN) website interface and database with a focus on improving search queries through machine learning as part of a team of developers.

Determined the most common phrases (bi-,tri-, and four-grams) in the U.S. Legal Code and mapped changes in the rankings of these phrases from 1925-2012.

Developed a data analysis sytem using Python-based NLP libraries to process opinions written by the U.S. Supreme Court Justices to draw conclusions about the complexity, sentimentality, and polarity of their writing.

Used R to research mutations in the RAS pathway in Caenorhabditis elegans to determine possible sites of cancer in the equivalent human pathway.

Spearheaded the inaugural Yale Hack for Justice to encourage multi-disciplinary collaboration between Yale social justice organizations and computer science students. Emerging projects addressed reproductive justice and prison reform – one of which led to a new website for the Yale Undergraduate Prison Project.

Developed a year-long computer science curriculum applicable for students in grades 5 – 8 to teach programming fundamentals that culminated in a final project.

Organized a computer science project fair for more than 120 students to showcase student progress after a year of the Code Haven curriculum.

Directed a conference that will guide more than 50 teachers from elementary and middle schools across Connecticut on how to introduce computer science and programming software into their classrooms.

"The Non-Religious Political Identity: Rhetoric & Policies of the Secular Caucuses in the United States." 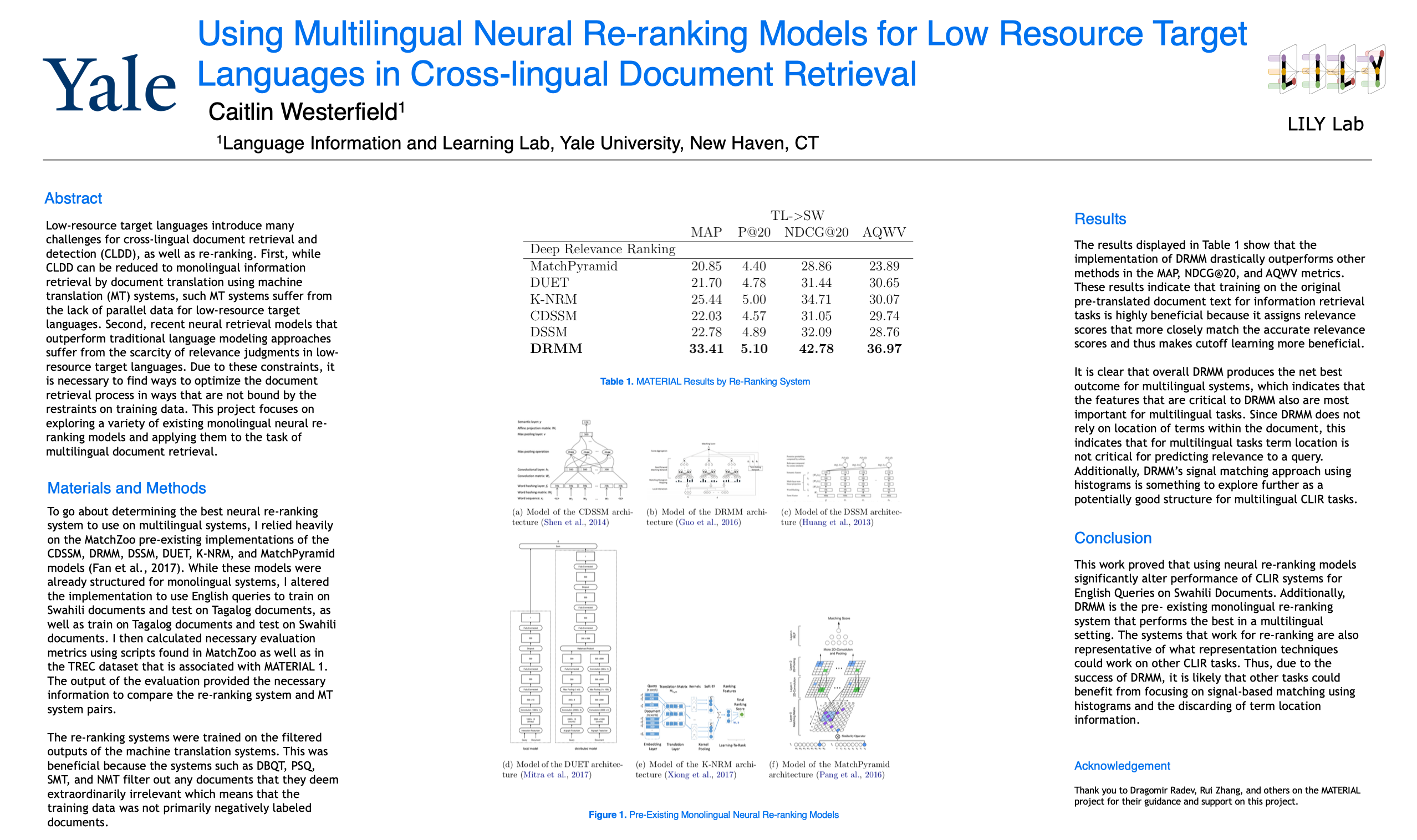 Abstract: Low-resource target languages introduce many challenges for cross-lingual document retrieval and detection (CLDD), as well as re-ranking. First, while CLDD can be reduced to monolin- gual information retrieval by document translation using machine translation (MT) systems, such MT systems suffer from the lack of parallel data for low-resource target languages. Second, recent neural retrieval models that outperform traditional language modeling ap- proaches suffer from the scarcity of relevance judgments in low-resource target languages. Due to these constraints, it is necessary to find ways to optimize the document retrieval process in ways that are not bound by the restraints on training data. This project focuses on exploring a variety of existing monolingual neural re-ranking models and applying them to the task of multilingual document retrieval. 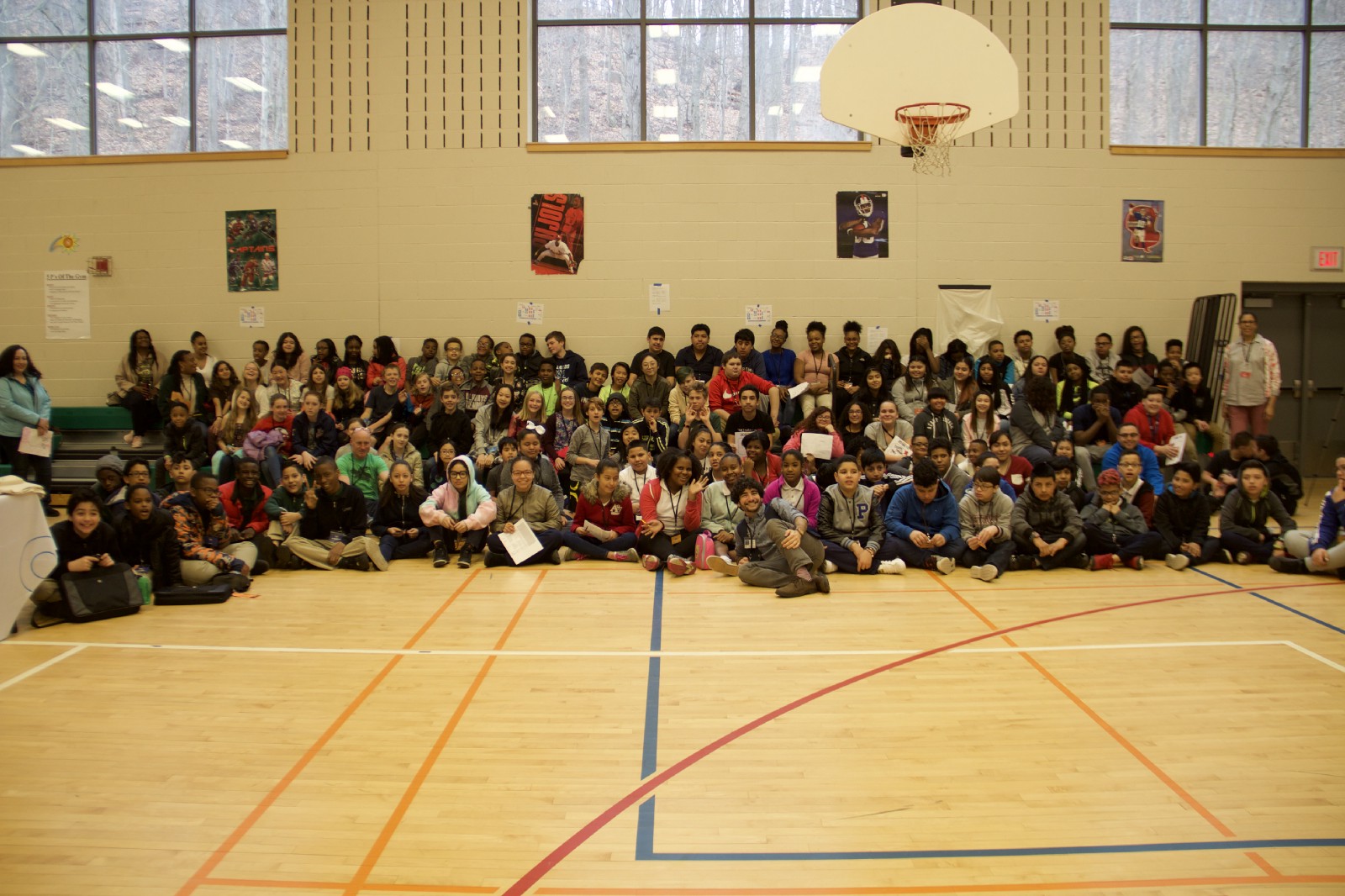 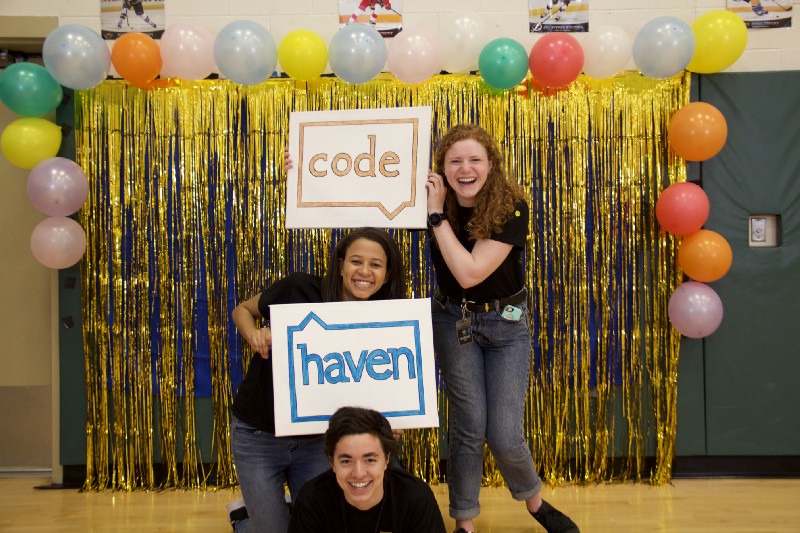 This year, Code Haven held our first Computer Science Project Fair. At the fair, over 120 middle schoolers that we teach computer programming to each week converged at the Bishop Woods School's gymnasium to present the apps they had been building in MIT App Inventor over the past few months. 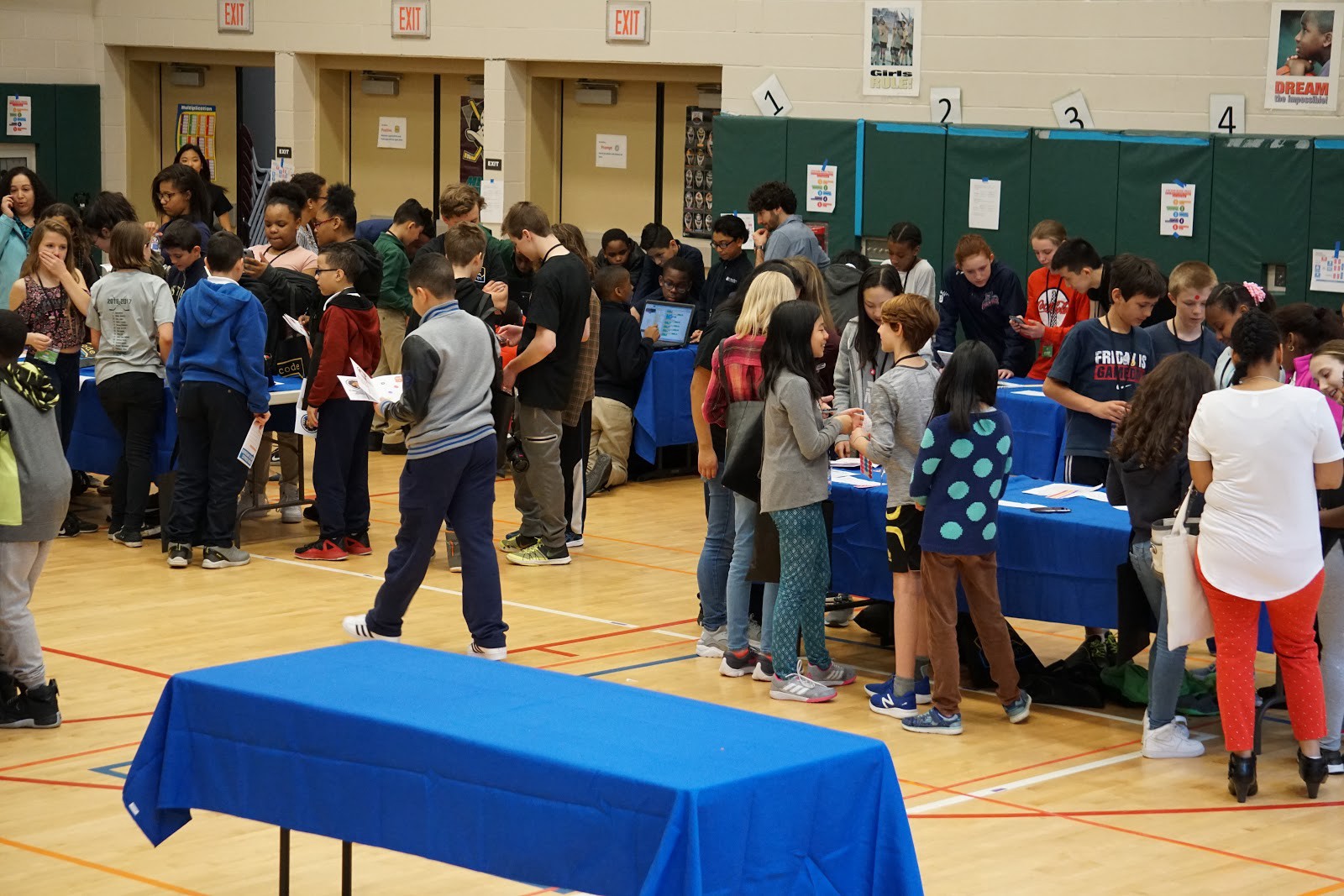 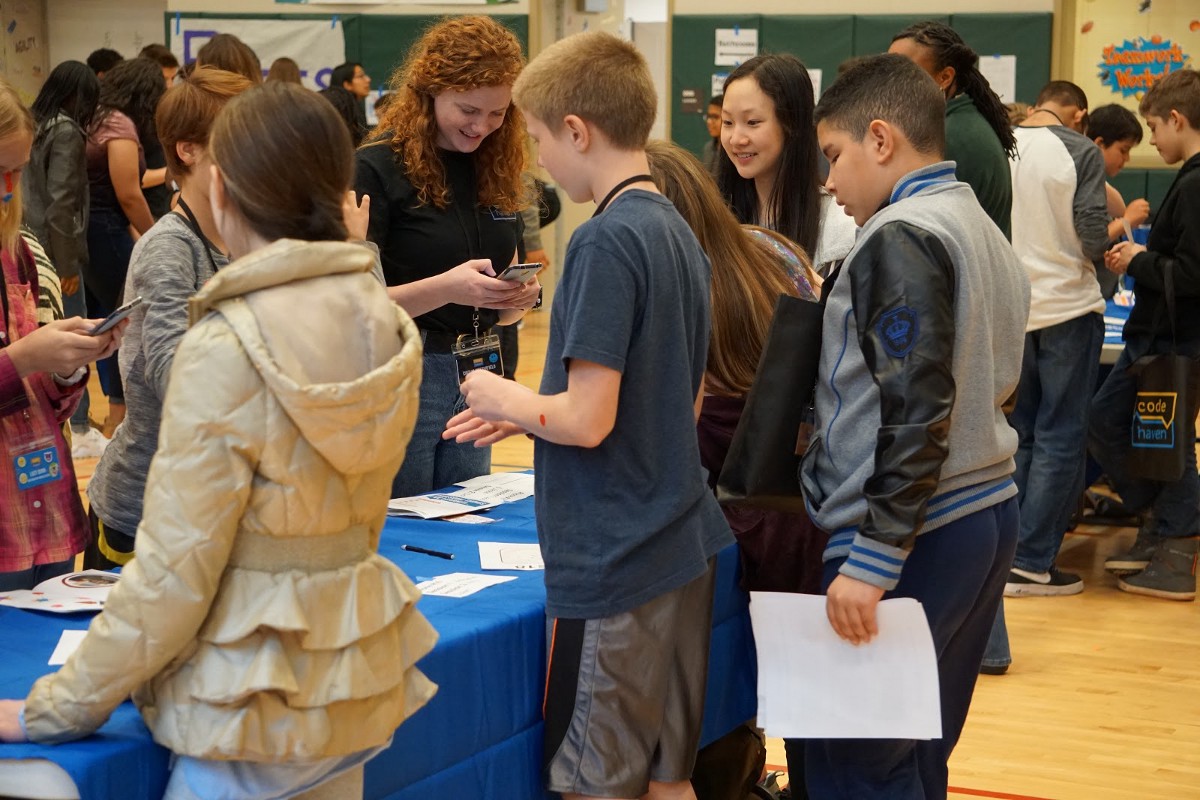 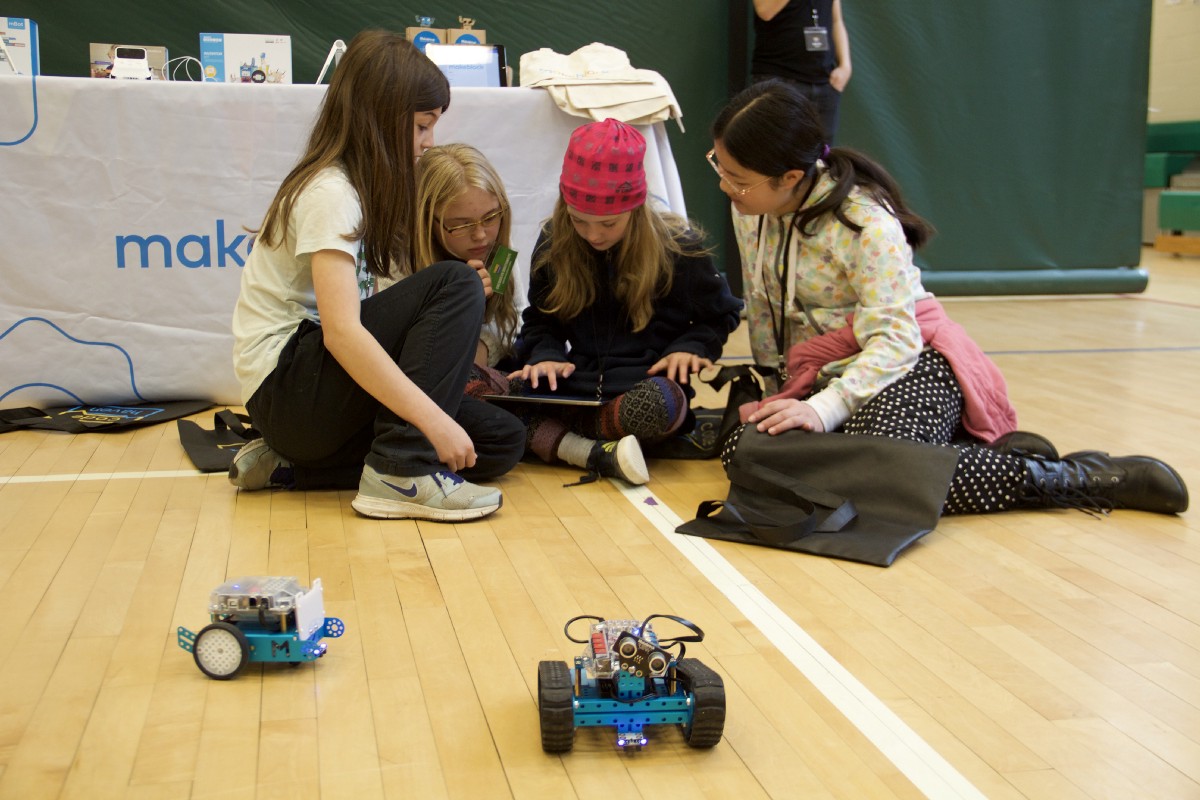 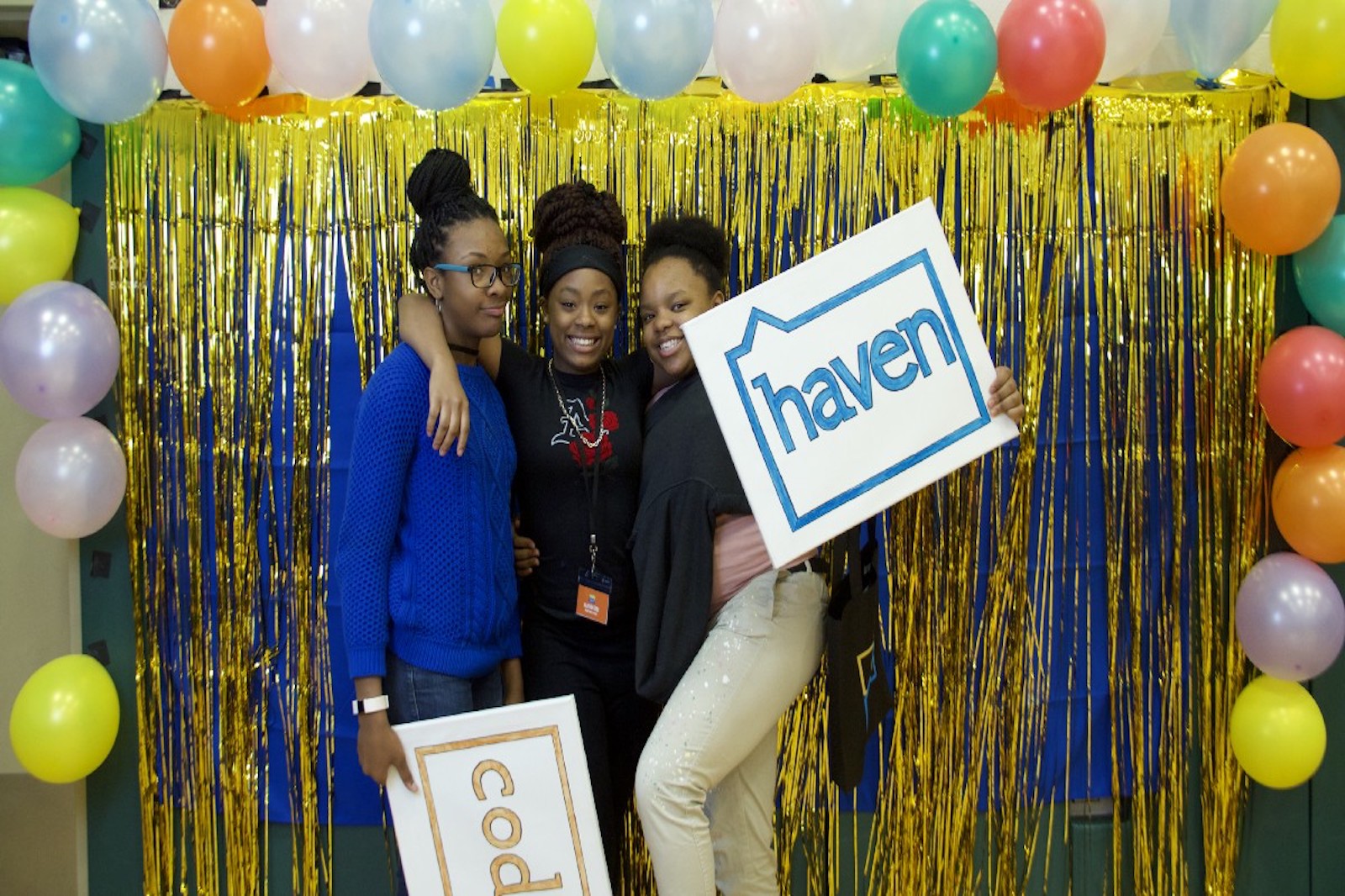 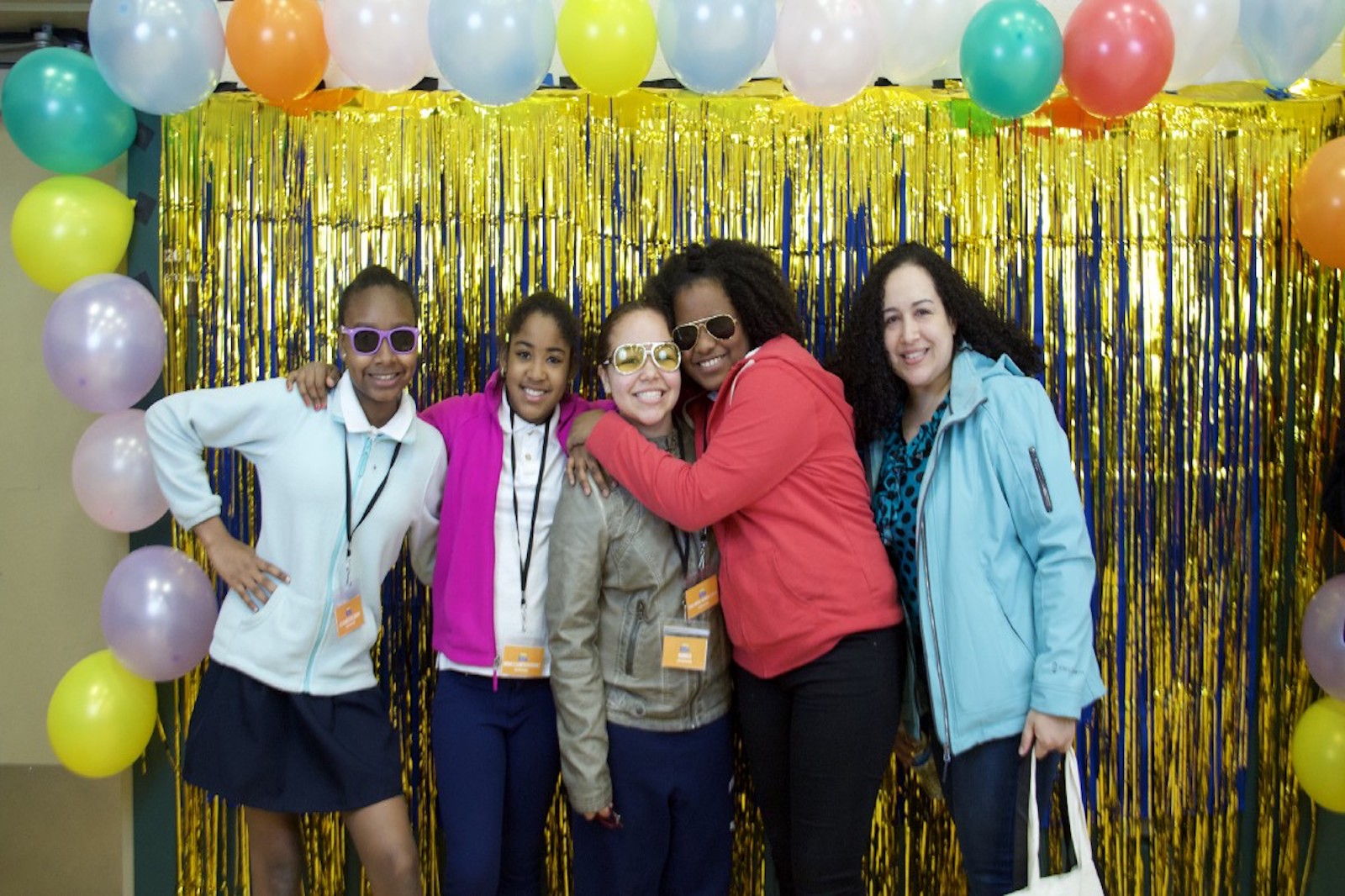 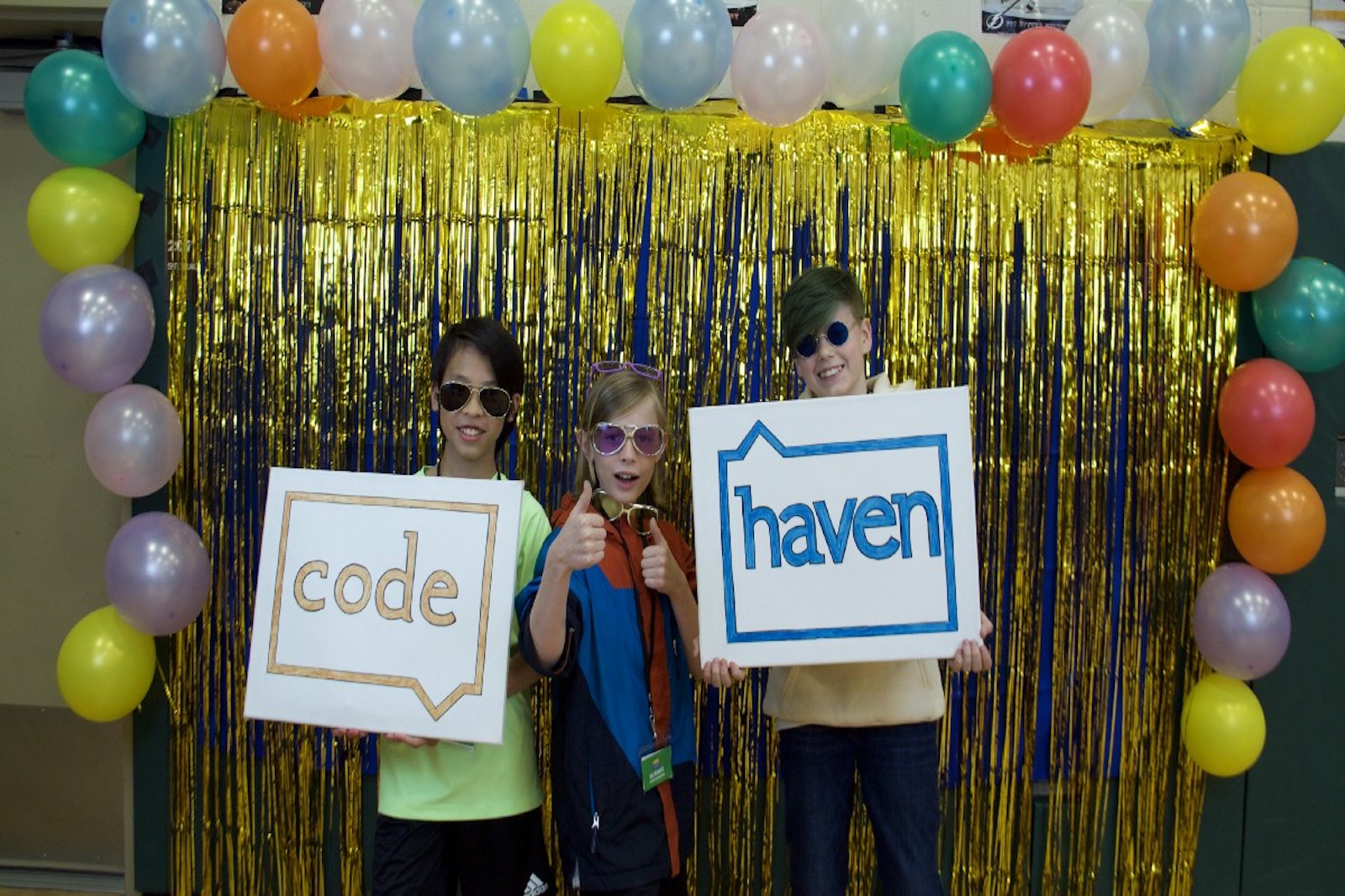 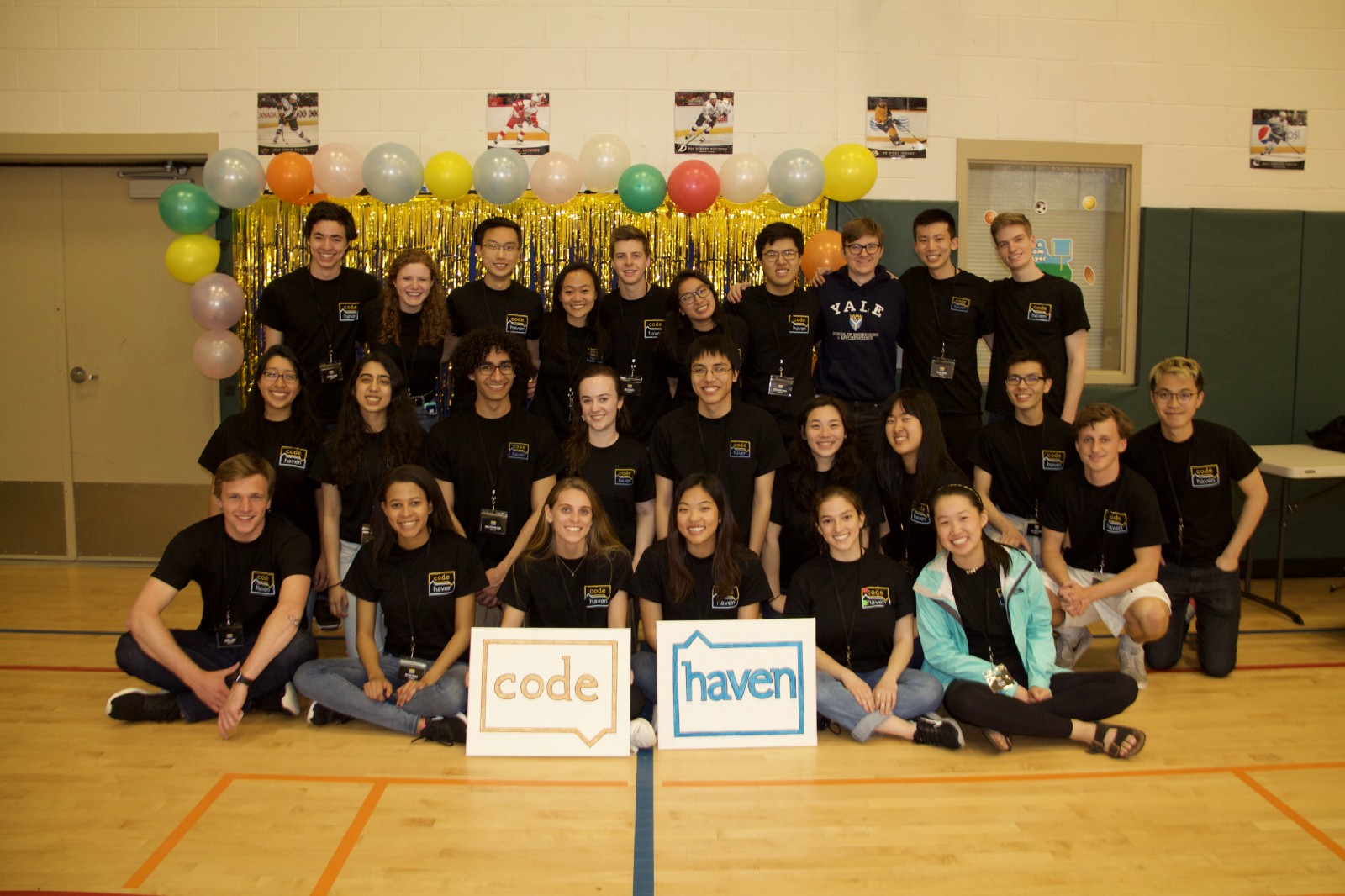 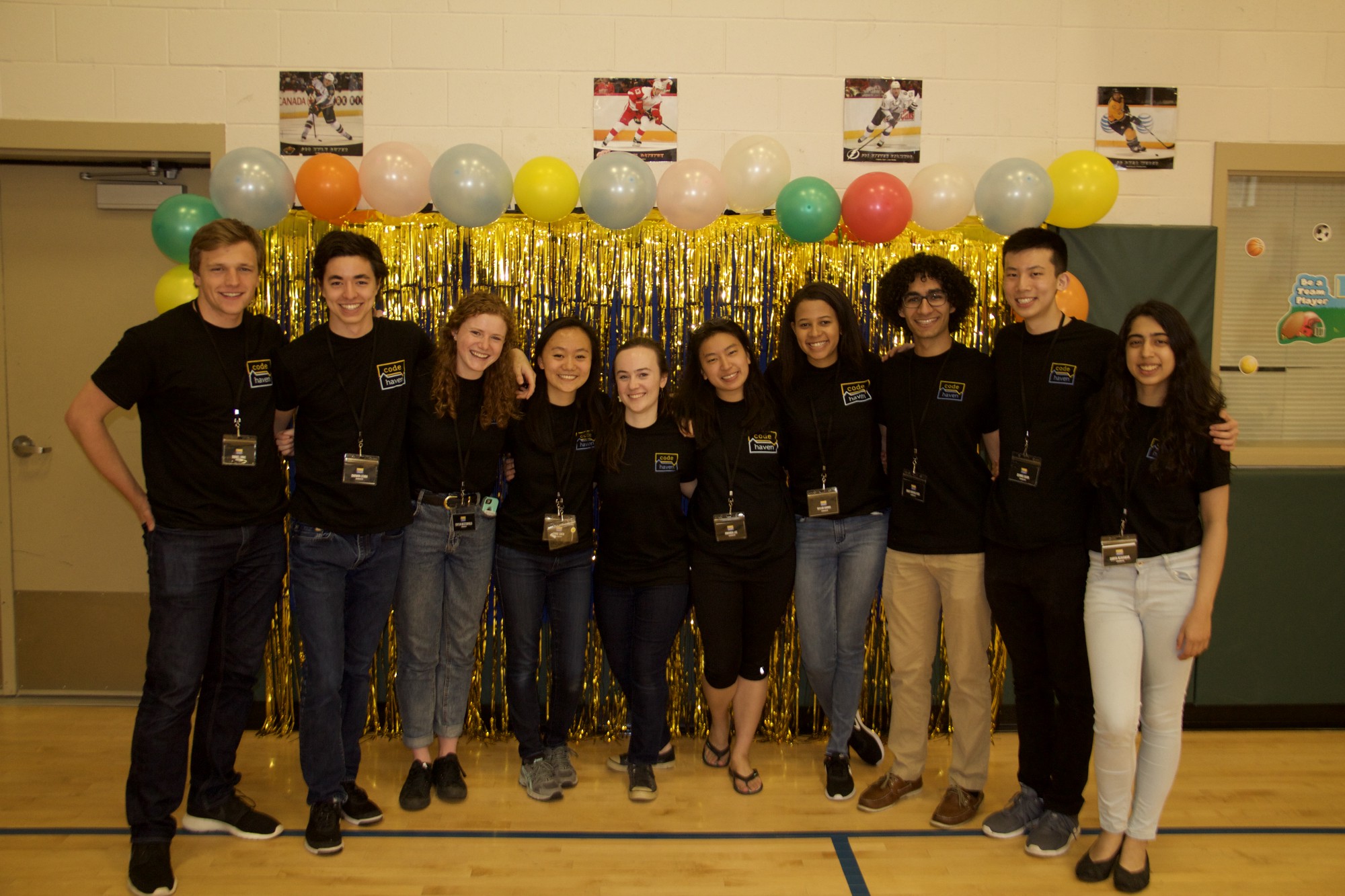 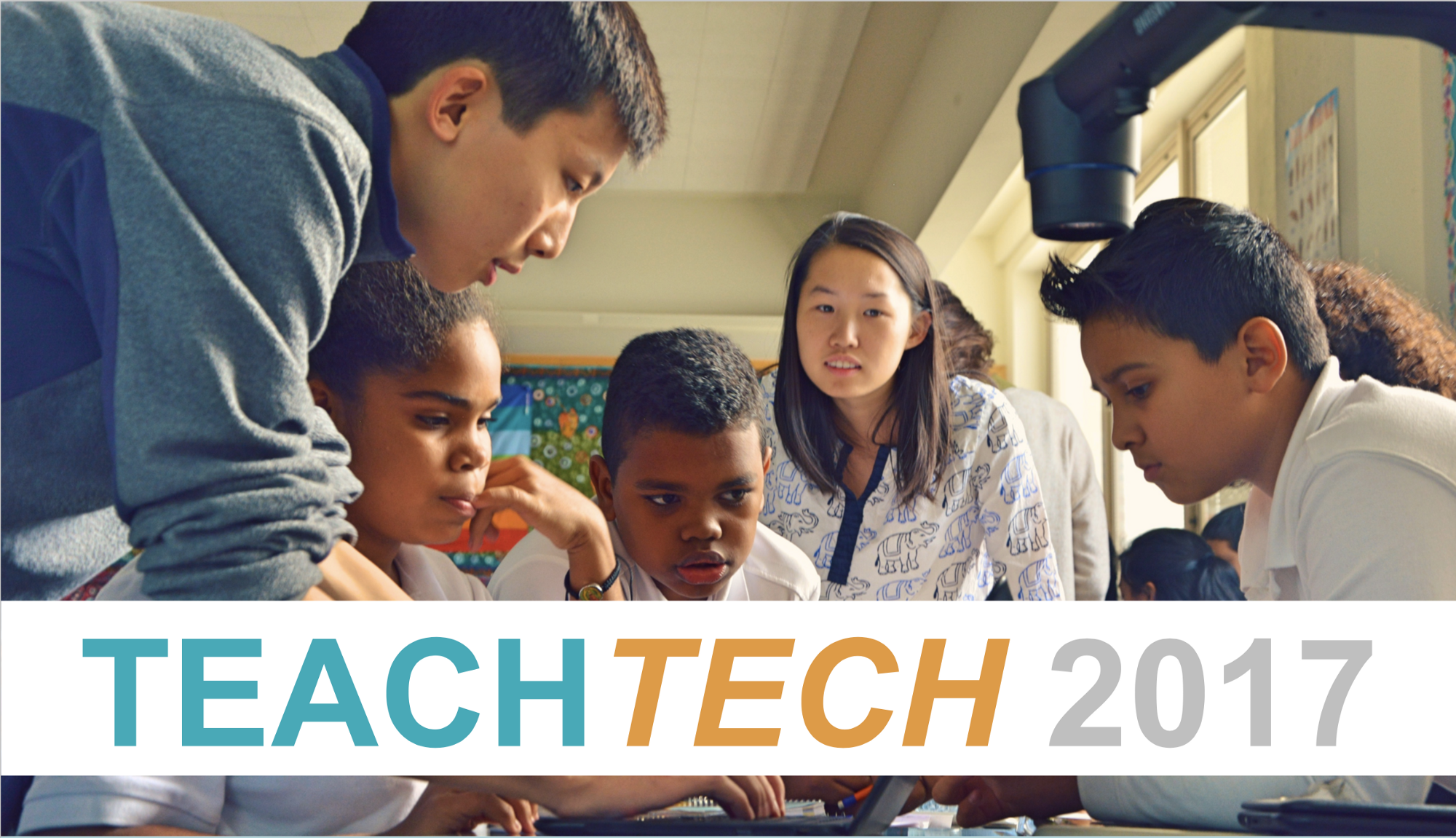 The first TeachTech was a conference that taught K-8 teachers how to incorporate computer science concepts into their classrooms. The day was filled with technical workshops, a panel of educators, and a presentation on how to teach computer science fundamentals. Twenty five teachers attended and said that they plan to integrate our materials into their own classrooms across Connecticut.

Read more in our Medium article: How we Taught Teachers to Teach Coding: TeachTech 2017 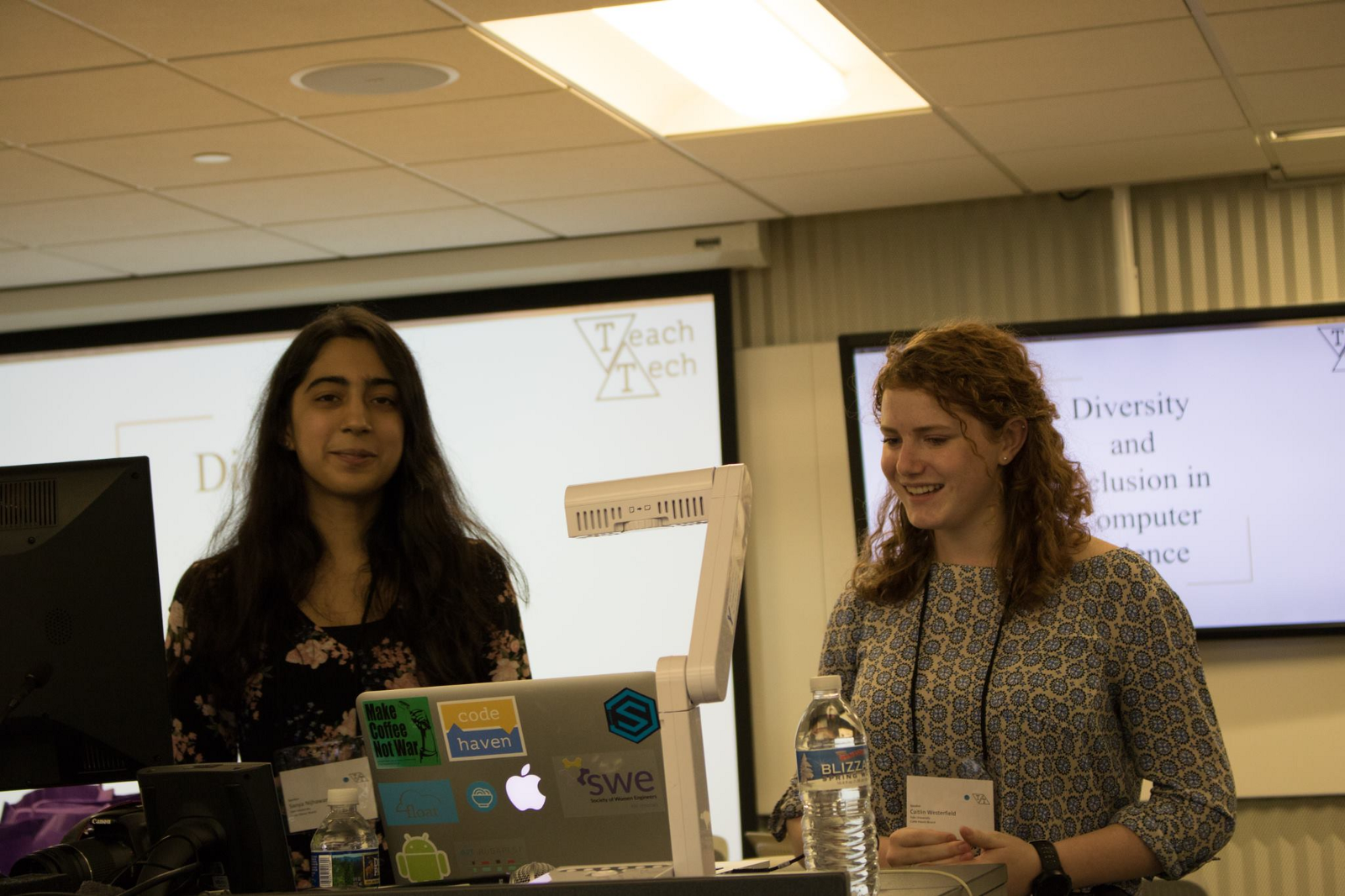 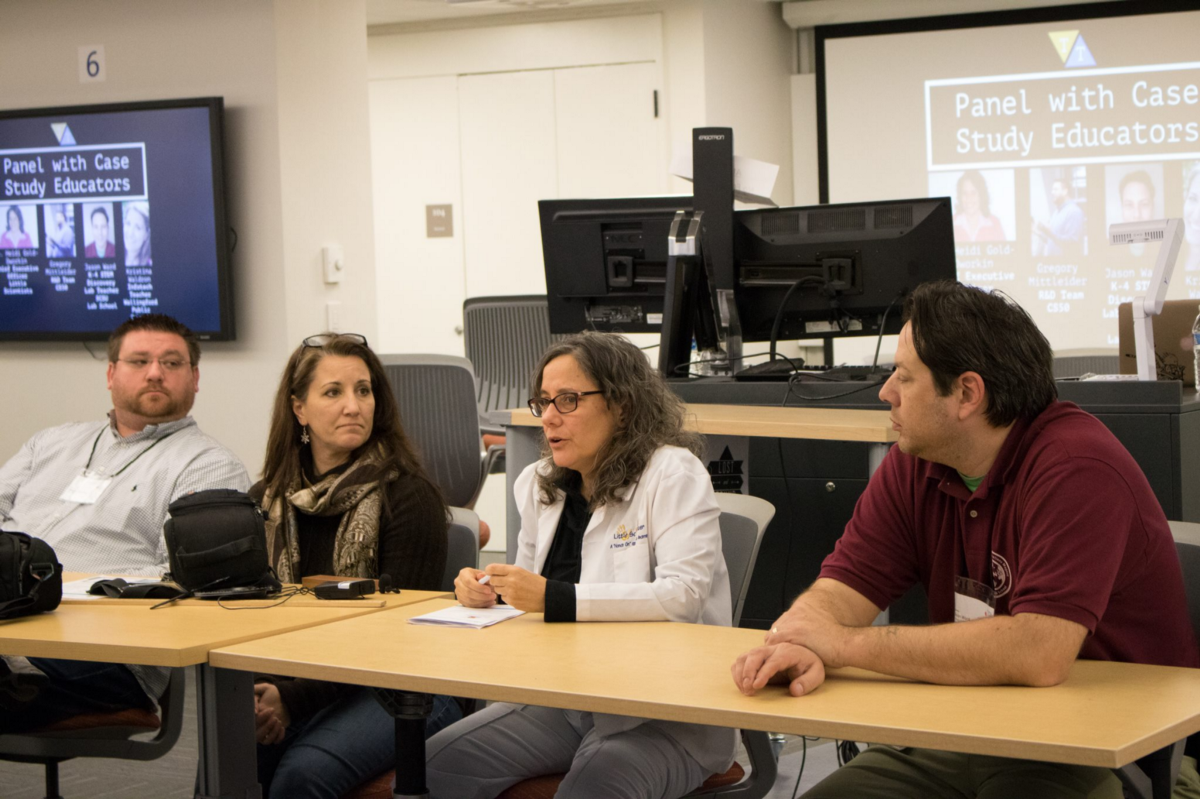 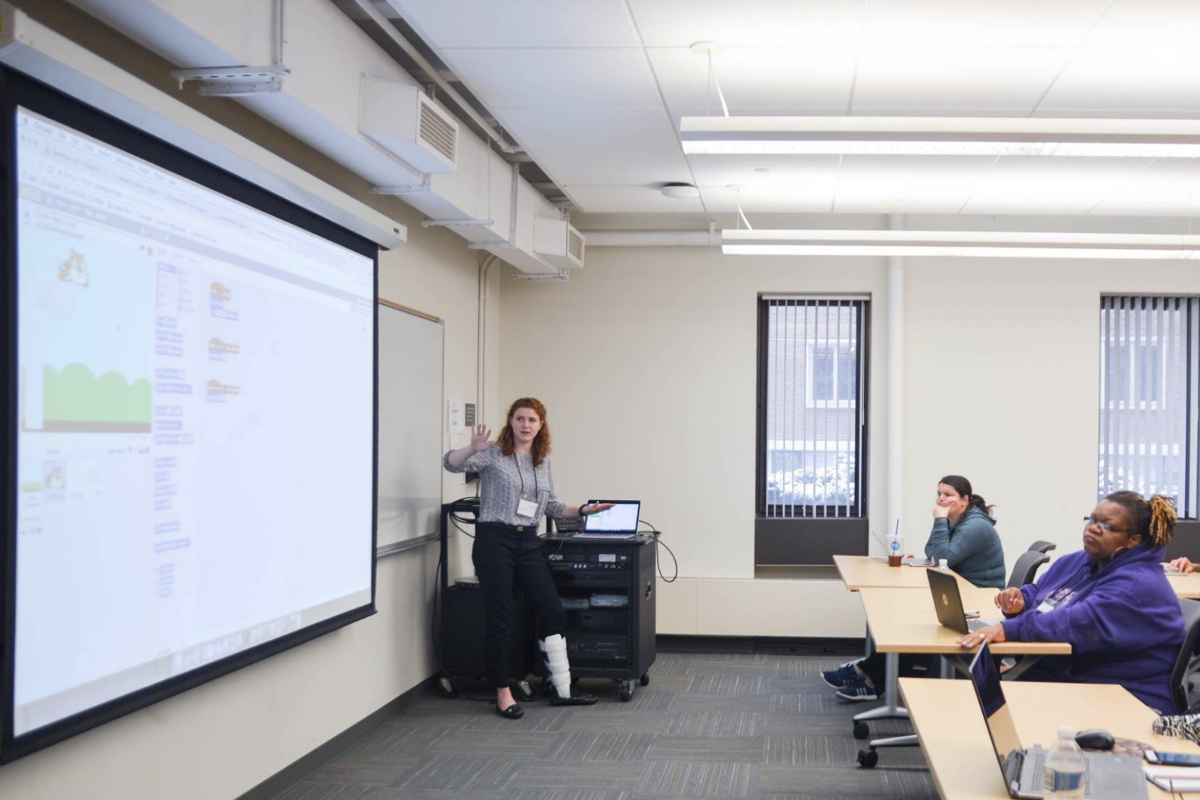 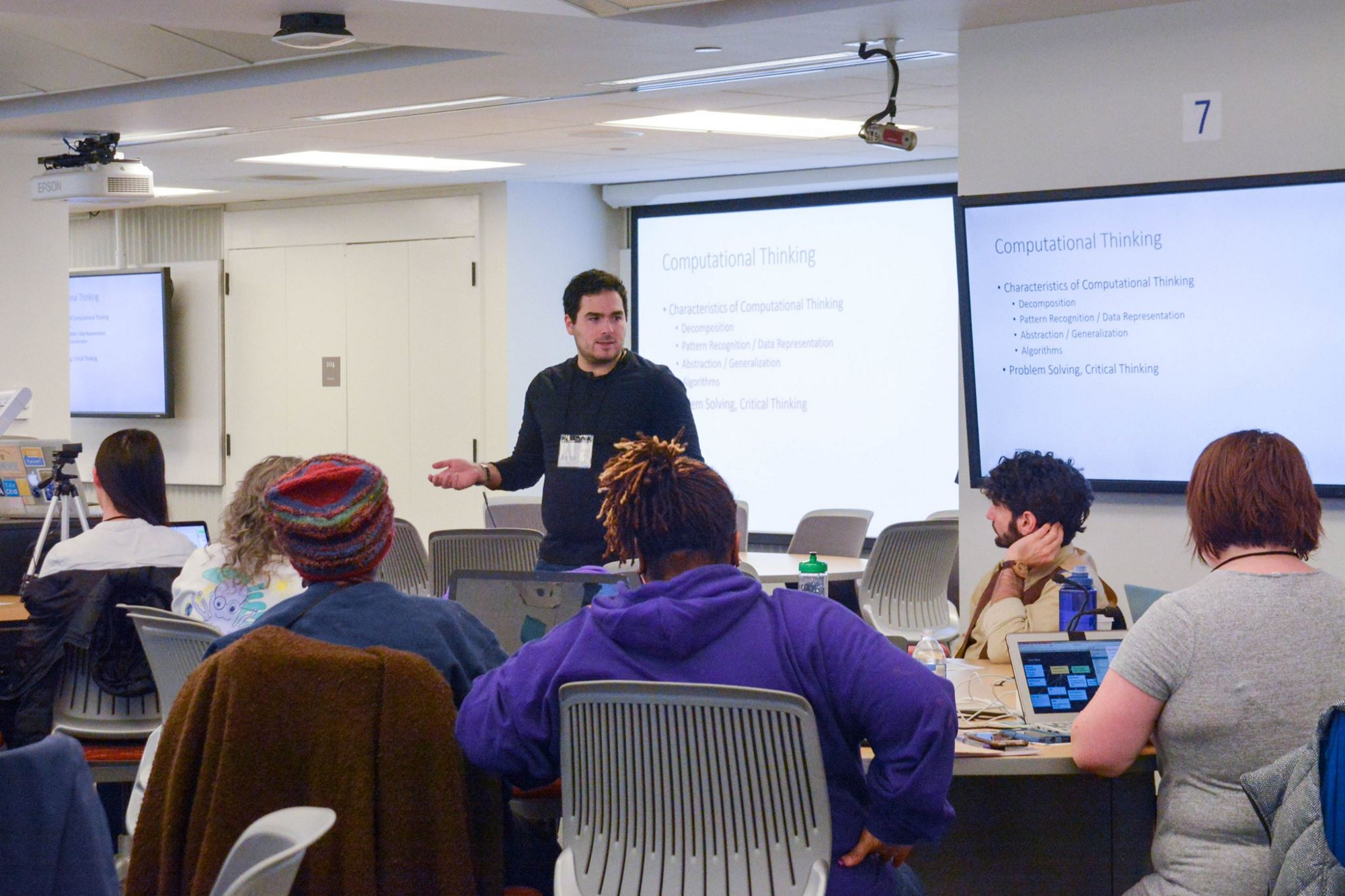 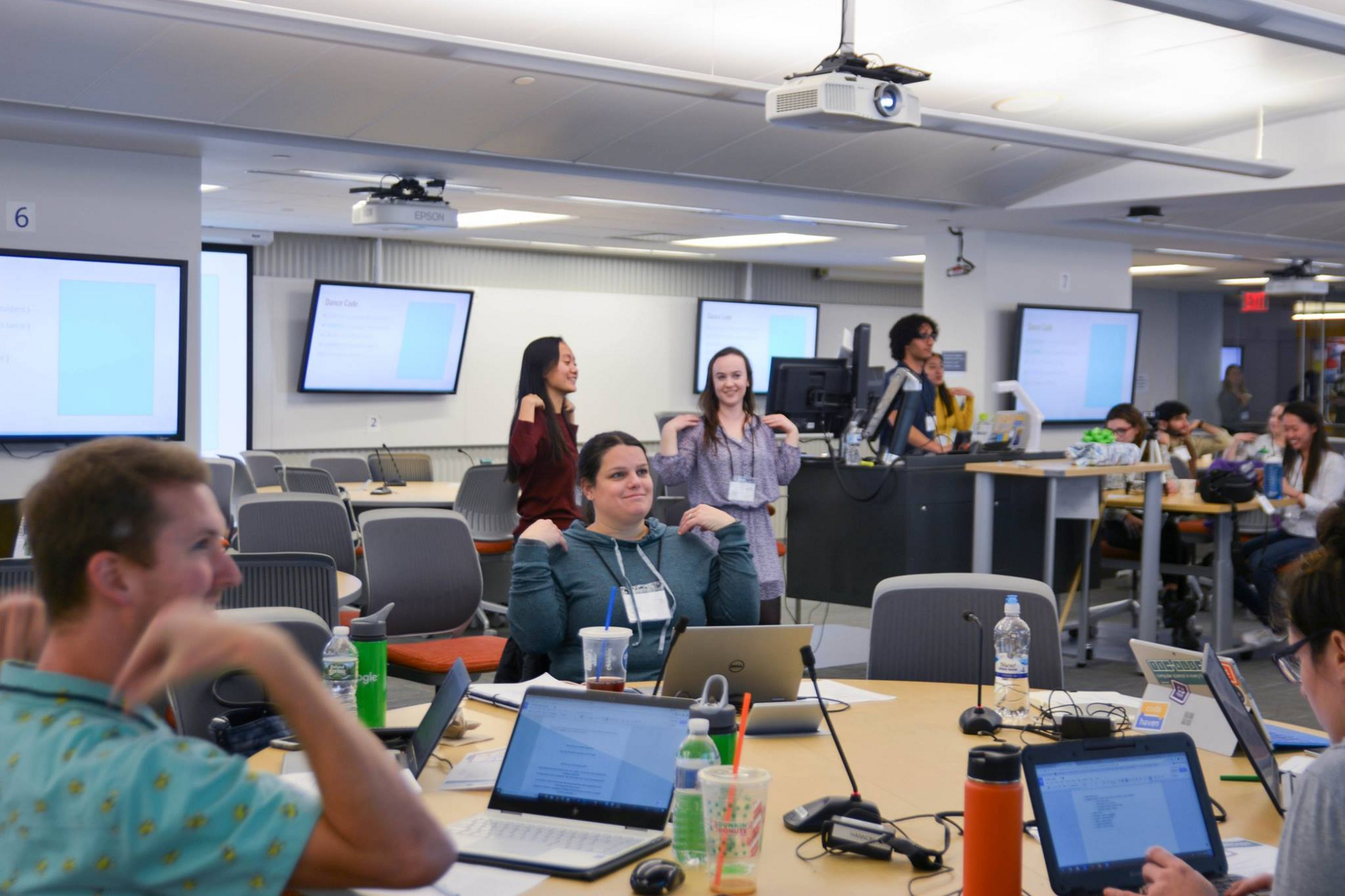 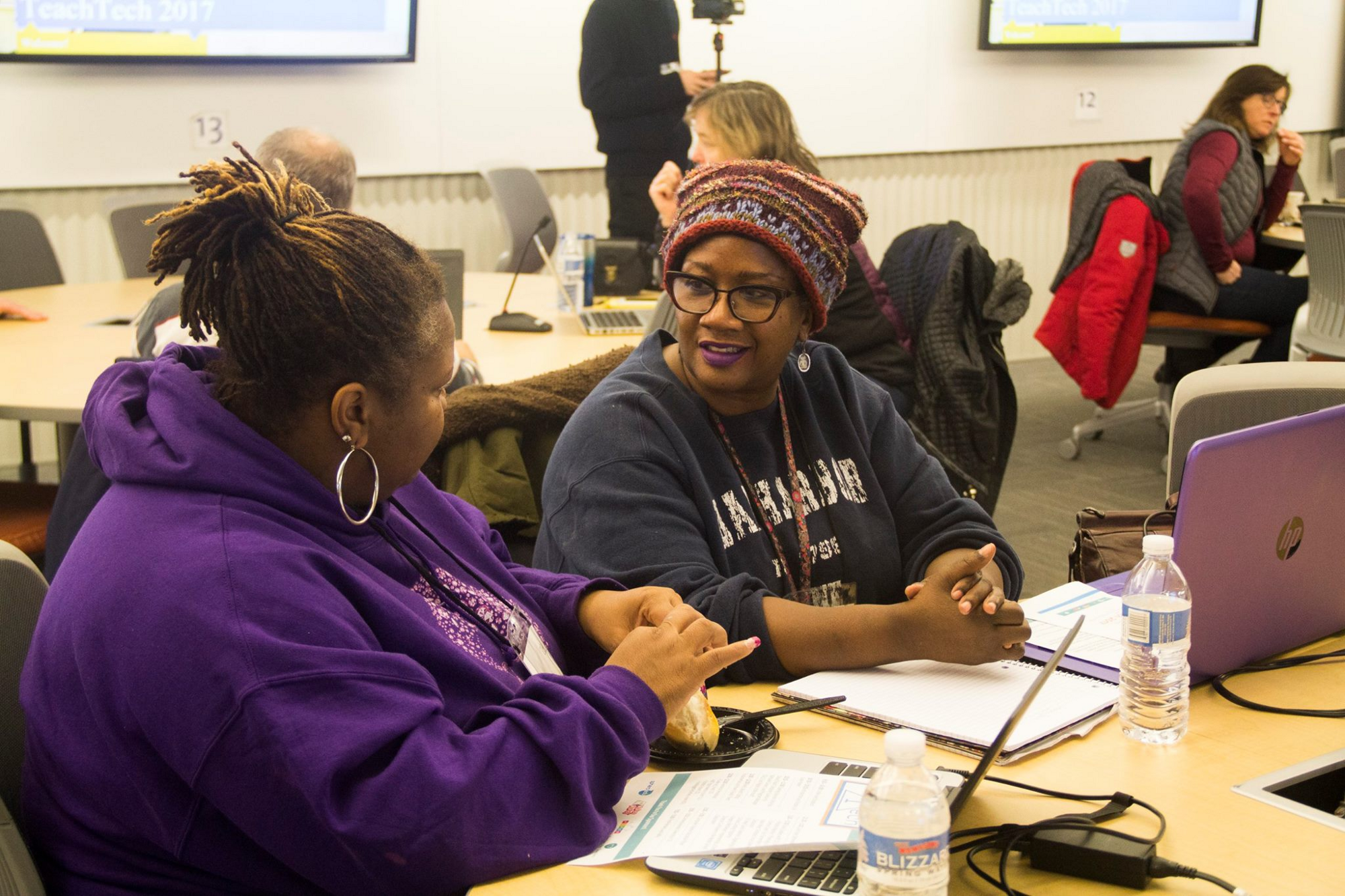 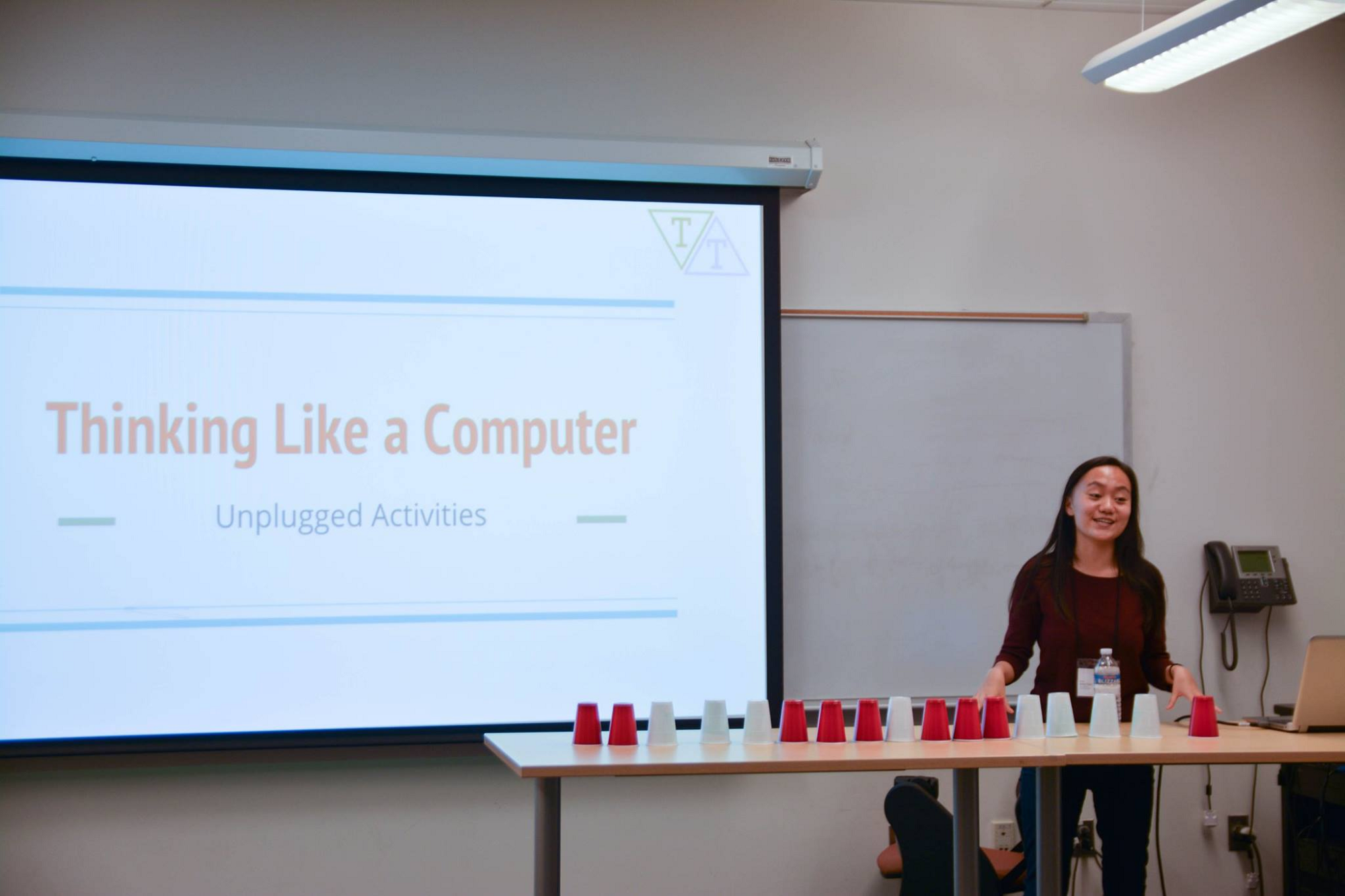 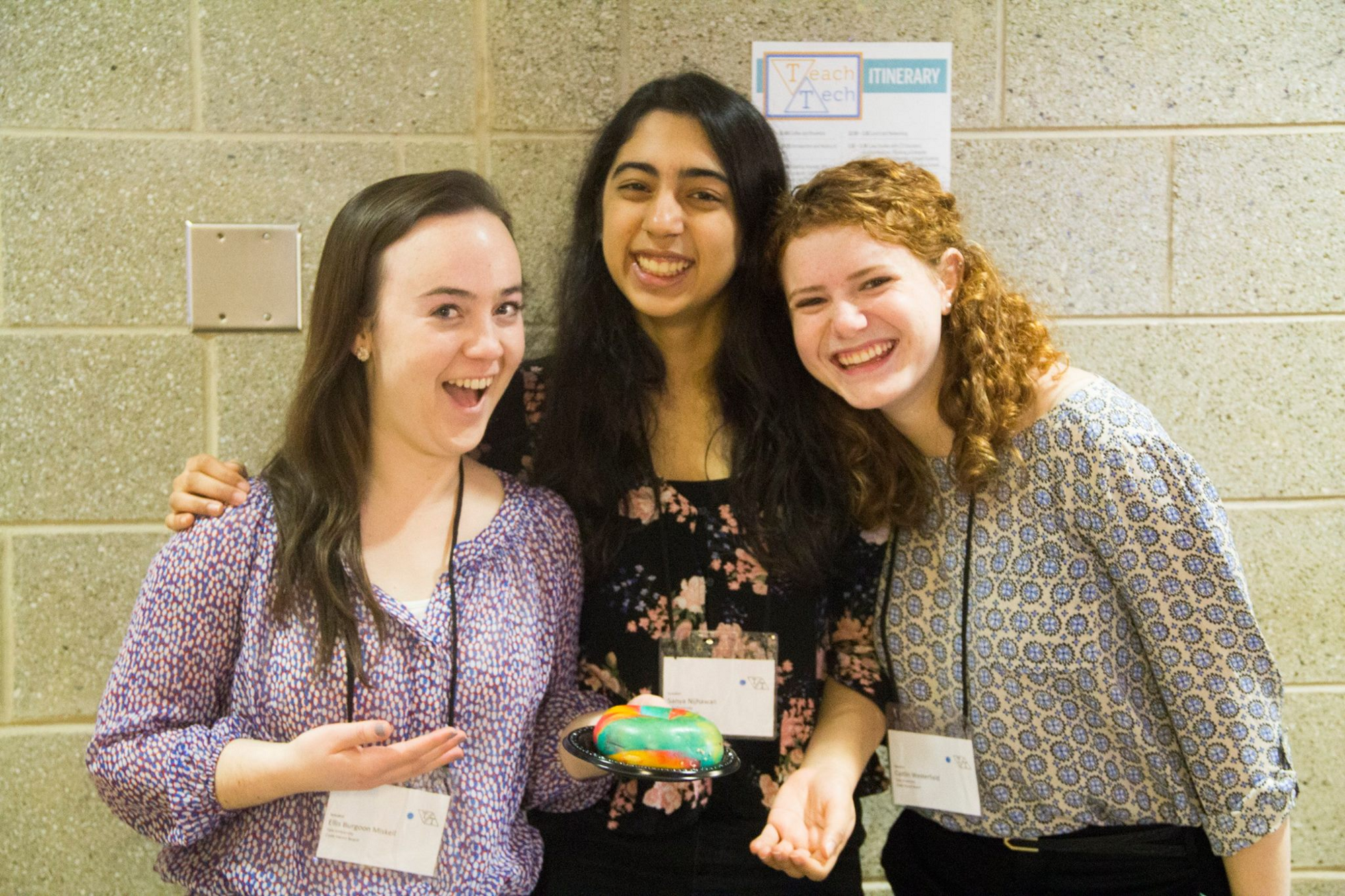 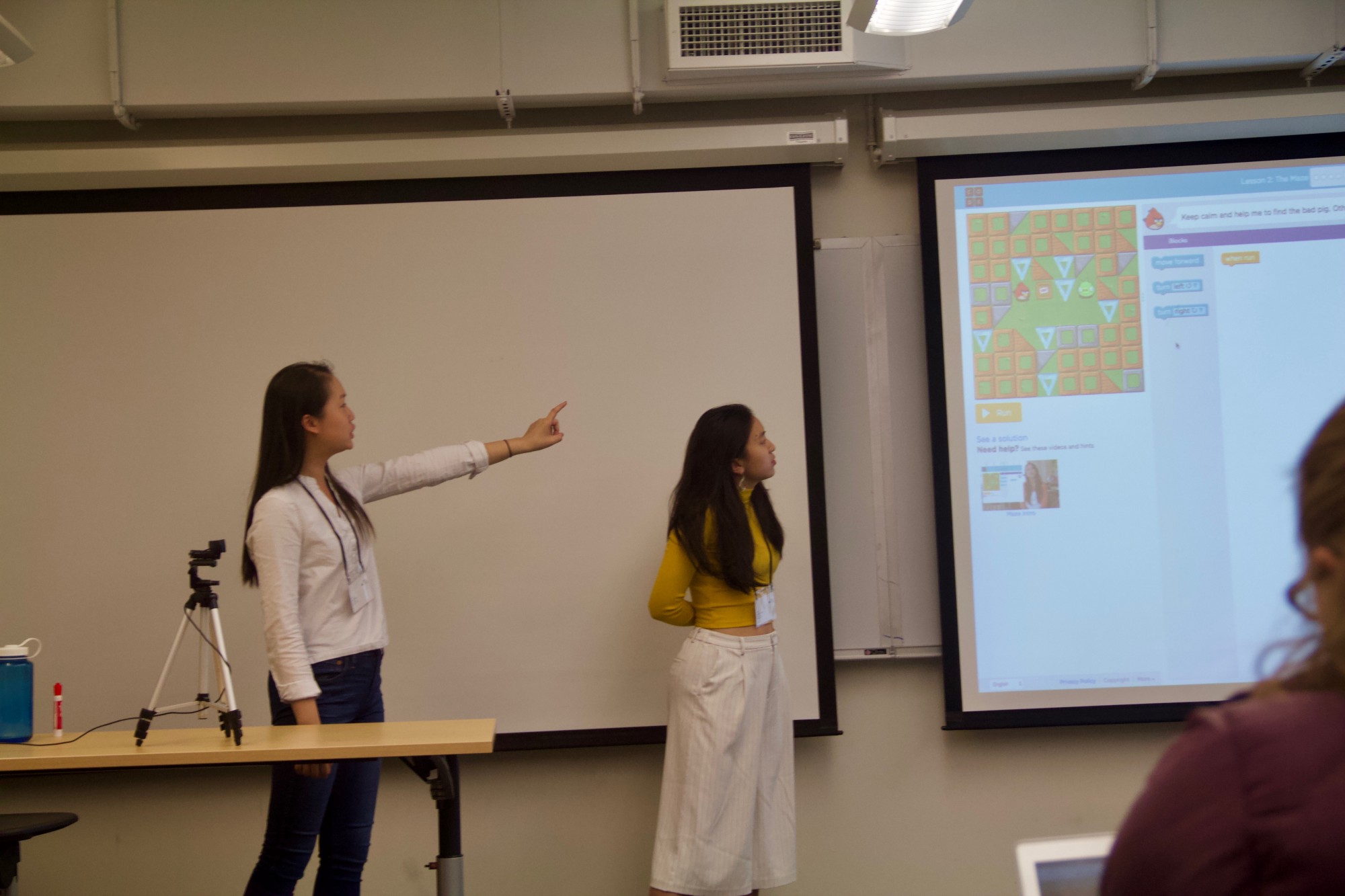 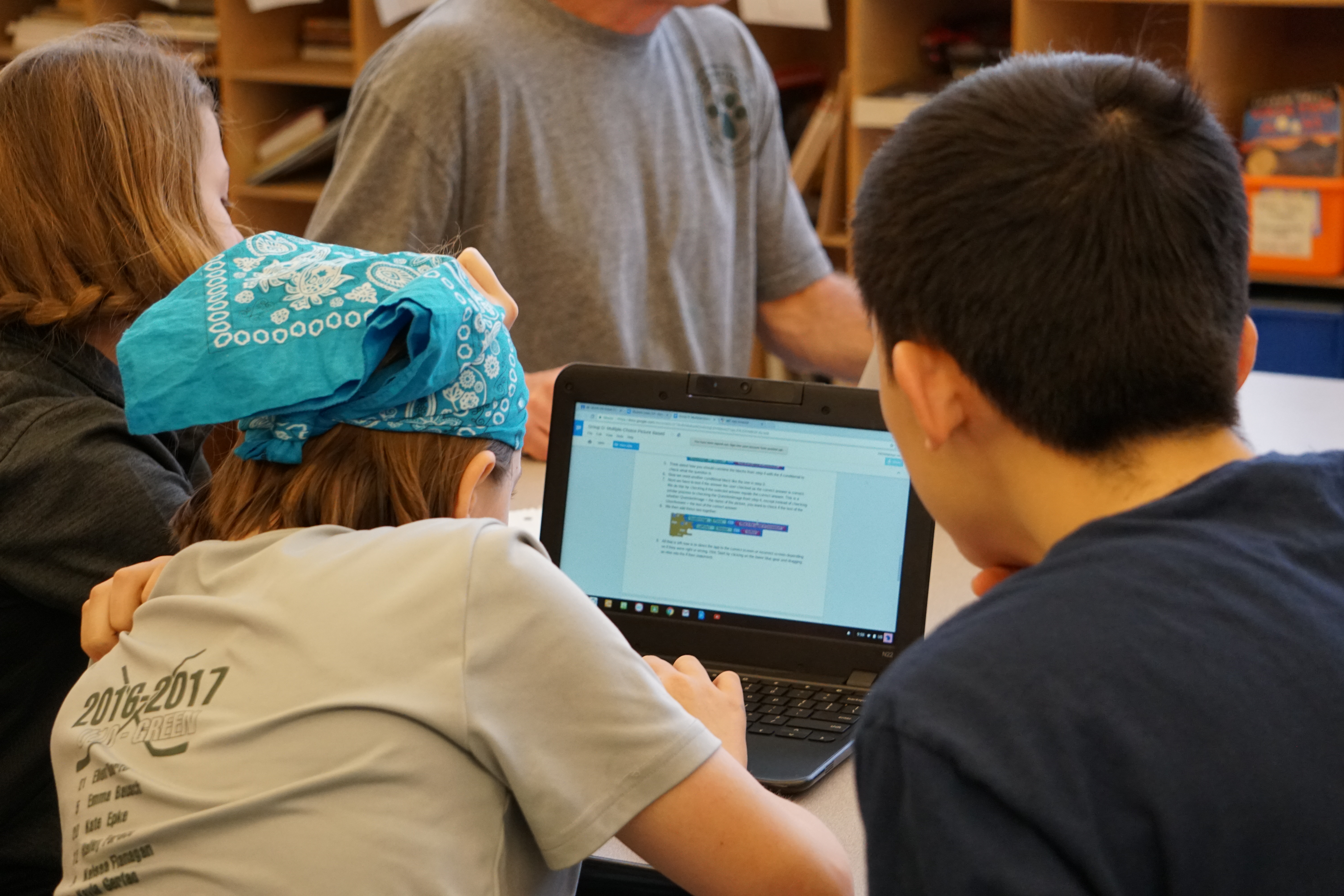 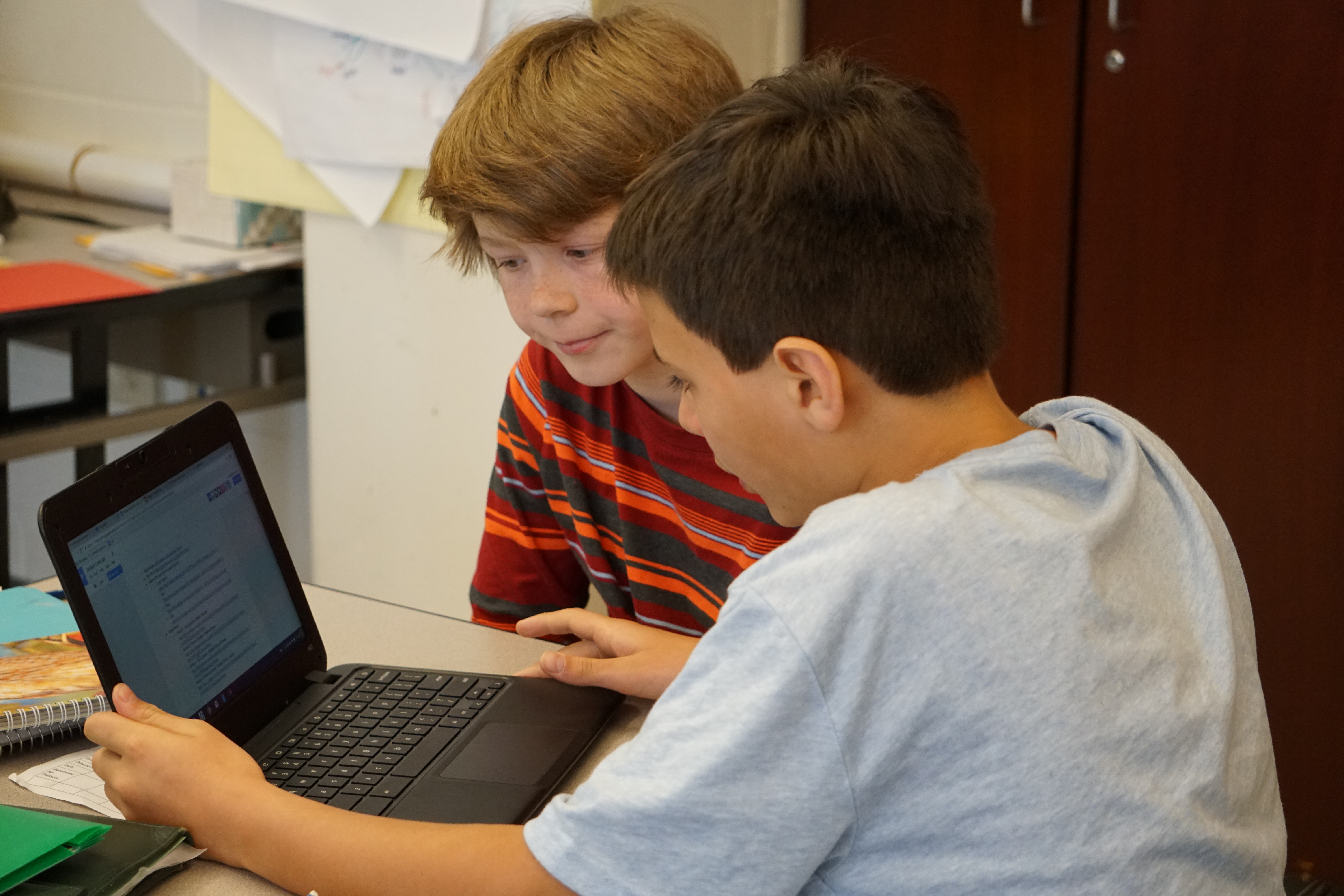 Through Code Haven, students will gain an introduction to computer science that covers the meaning of the discipline, the types of logical thought it involves, some key terms and concepts, and examples of computer science in the world. Through programming exercises and an extended project to develop a unique mobile app, our curriculum is designed to give students a foundation of knowledge to carry them through computer science in the future, but most importantly it focuses on attracting and developing an interest in CS to motivate all demographics of students to pursue CS in years to come.

Part 1 of the program focuses on key computer science concepts that will be taught in Scratch as well as through unplugged and hands-on robotics activities. Part 2 of the program will be an opportunity for students to build creative personal projects in MIT App Inventor that they will present at the Spring 2019 Code Haven Project Fair to the entire class of Code Haven students, teachers, and parents.